The phantom, Alvar, is based on freely available online anatomic atlas, BodyParts3D (http://lifesciencedb.jp/bp3d/), which consists of 3D surface meshes of over 2000 organs or their parts. Alvar weights 72 kg, is 176 cm tall, and has a surface area of 1.83 m^2. 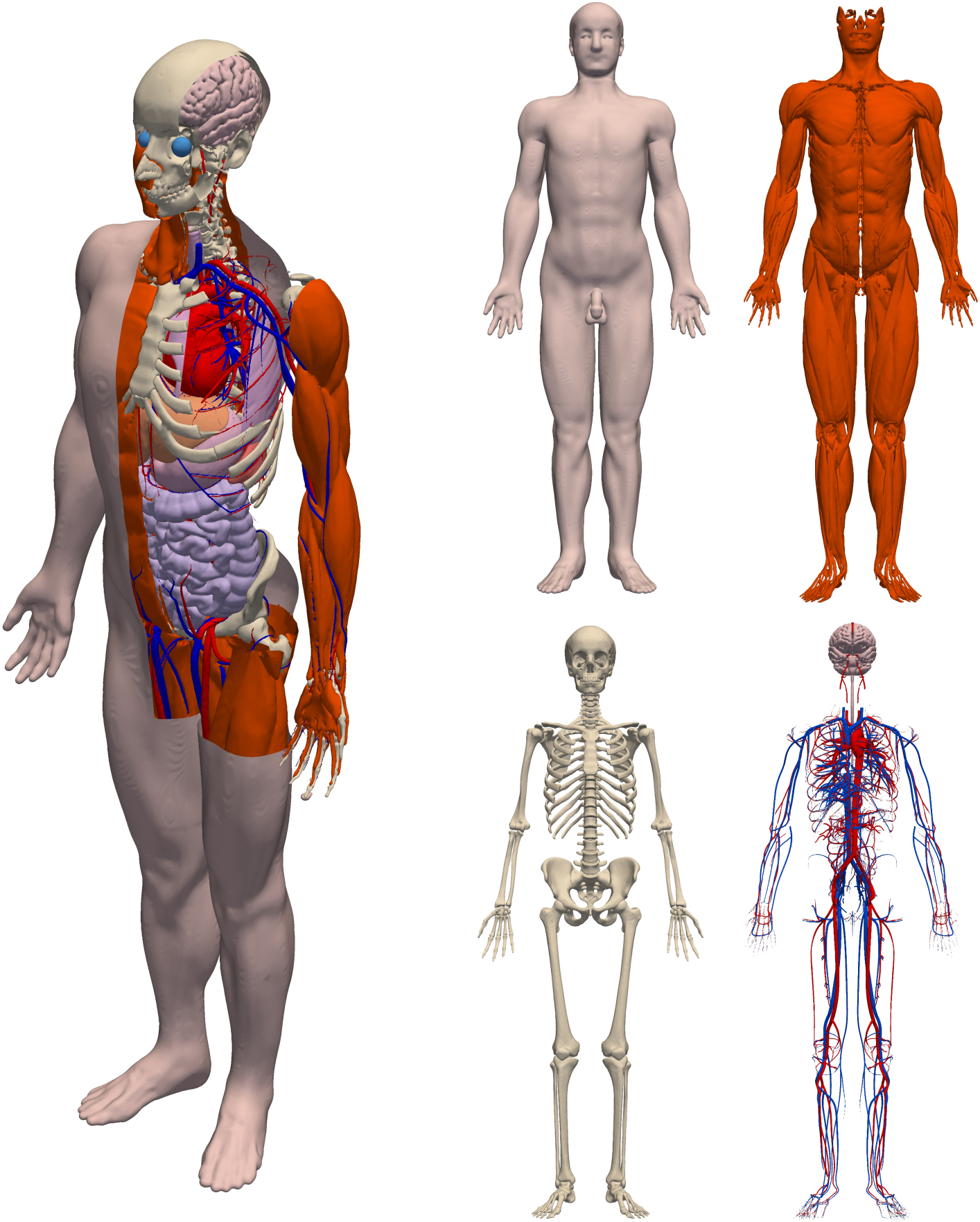 To make the model suitable for electromagnetic dosimetry, several modifications were applied when the original surface-based models were voxelized. The most important are listed below.

The brain of Alvar is based on ICBM 2009a nonlinear asymmetric template MR images, which represent the average brain of 152 healthy individuals (Fonov et al 2009, 2011). The FreeSurfer image analysis software (Dale et al 1999, Fischl et al 1999) was used to segment the brain from the template images. The process produced segmentation of white and grey matter of the cerebrum and cerebellum, brainstem, and subcortical nuclei. The cerebral cortex is further subdivided into 76 gyral regions (Desikan et al 2006). An affine transformation was applied to map the template brain to the coordinates of Alvar. The inferior and ventral parts of temporal lobes were slightly deformed to make the brain fit within the skull of Alvar.

The original skin model of the BodyParts3D database does not fully follow the boundaries of other tissues. At several occasions, other tissues ”pop out” from the skin, and at some anatomic sites, the subcutaneous space is excessively thick. To correct these problems, the original skin was completely replaced.

The new skin is 2 mm thick and smoothly follows the boundaries of muscles, bones, vasculature, and internal organs. The thickness of the subcutaneous fat layer depends on the body region and was determined so that the total body fat content agreed with the reference values (ICRP 2002).

The BodyParts3D atlas does not include subcutaneous fat or fat that surrounds internal organs. In Alvar, all cavities between tissues and the subcutaneous cavity are filled with fat. Consequently, all tissues that are not included, e.g., peripheral nerves, are automatically modelled as fat.

Heart is based on BodyParts3D version 5.0i. The original surface based models were voxelized and connected to each other, and any holes were removed using closing (image processing). Fat was added to fill auriculoventricular and interventricular grooves. Finally, a thin layer of pericardium (not in the original model) was added to separate the heart from other tissues. The conduction system of the heart was separated from other hearth muscles.

Dale A M, Fischl B and Sereno M I 1999 Cortical surface-based analysis. i. segmentation and surface reconstruction. Neuroimage 9(2) 179–94